Having seen Borobudur at sunrise, it seemed fitting that we should visit Prambanan, Yogyakarta’s other great temple complex, for sunset. Of course, we didn’t exactly plan it that way, but it was one of those coincidences in life which I find disproportionately satisfying, and satisfaction was definitely needed that afternoon. The site’s entry fee was hefty, according to the signs we only had about 40 minutes until closing, and the whole site was swarming with loud schoolchildren and selfie-snapping tourists, so of course I was determined to hate everything about it.

Having stomped up a couple of the stupas, scowled at some of the reliefs (which looked extremely similar to those at Borobudur – I don’t know this for sure but would be prepared to bet they were done by the same families of stonemasons…), and complained about the fact that in our hurry to get to the actual monument before closing we’d zoomed past all the information boards so I didn’t understand how the temple was actually used, I plonked myself down on a wall to sulk in peace.

Tom wandered around a bit more, during which time the crowds thinned dramatically and peace settled over the temple. I was thrilled to get a clear view of Mount Merapi in all its volcanic glory, and the stupas looked ever more dramatic in the changing evening light. We were among the last visitors to leave, shepherded away by site security, stopping to snap pictures of evocative silhouettes as we made our way to the exit. I was forced to admit that maybe it hadn’t been that bad after all. 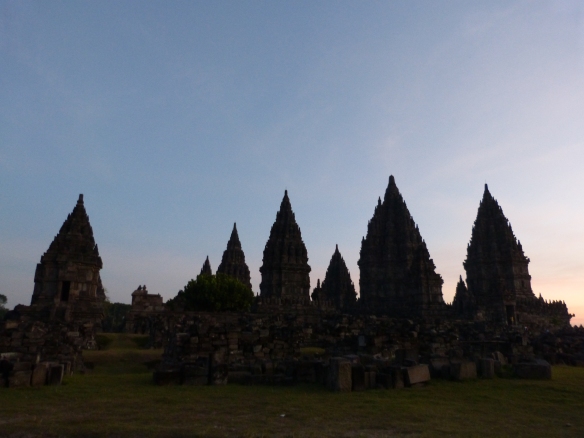 One regular feature of our holiday trips is lengthy walks along busy roads, usually in the hottest part of the day. So far we’d managed to avoid that, remarkably, but instead we managed a good distance around the perimeter of the Prambanan grounds en route for the Ramayana ballet‘s stage. Happily, though, the evening was reasonably cool and the pavement adequately lit, and even wide enough that the traffic wasn’t too alarming, all of which made a pleasant change.

The Ramayana is, we learned, the ancient Indian story of King Rama and the abduction of his wife Sita, which features a wide variety of characters who participate in either assisting or thwarting her rescue. In this Javanese dance interpretation, the story is subdivided into sections for ease of performance, and presumably for their audiences’ benefit too – 2 hours on a stone seat, however well-cushioned, was quite enough for me. 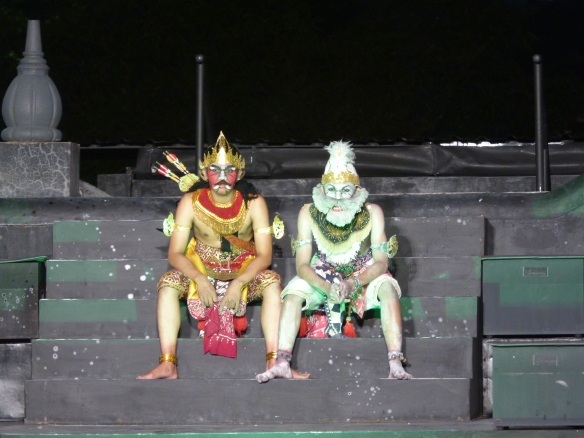 Spectacular Javanese costumes and a gamelan orchestra complete the spectacle, with the floodlit stupas of Prambanan providing a superb backdrop to the open-air stage. We saw the section in which Haruman, the heroic monkey, experiences all kinds of trials and tribulations in his attempts to reach Sita, and it was absolutely brilliant.

As ever there are FAR too many photos from the whole Singapore/Indonesia trip in my Flickr album – it’s possible I’ll get around to editing them one day, but meanwhile click here if you’d like to see more photos of Prambanan and the dancing.