Tom started considering possible viewing options as soon as he found out that a full solar eclipse was occurring over North America this year, but as the date drew nearer and nothing was booked I assumed he’d decided against it (or just forgotten). Then, a mere two weeks out, he came up with a plan – a thirteen hour Amtrak ride to Charlotte in North Carolina, then a Greyhound bus into South Carolina to experience the total eclipse. I was welcome to join him, or not, but he was going regardless!

Obviously I wasn’t going to pass on the opportunity of adding two new states to our total (and of course my going meant that we could rent a car rather than involve the bus), so the Saturday of eclipse weekend found us boarding the 7:39am train out of Newark. I really like the long-distance trains – you get loads of legroom, the seats recline a fair way, and the cafe car has actual tables you can sit at when you fancy a change of scene. We brought along an epic picnic, and spent the journey happily knitting, reading and snacking, adjourning to the cafe for coffee and wine at appropriate points of the day.

Sunday was earmarked for exploring Charlotte, so after breakfast we set out for a walk around the city centre. It was surprisingly pleasant – clean and with plenty of trees and outdoor seating areas, and some nice-looking bars and restaurants (mainly closed on Sunday morning), although it also had the rather soulless atmosphere you often find in the parts of American cities where nobody actually lives. Another point against was that none of the museums opened until noon, on Sundays, which is late even by NYC standards – Tom wondered if it was so everyone could go to church first – and as we were hanging around waiting for something to do I was rather sad we hadn’t started our car hire a day early and driven out to somewhere a bit more convivial. 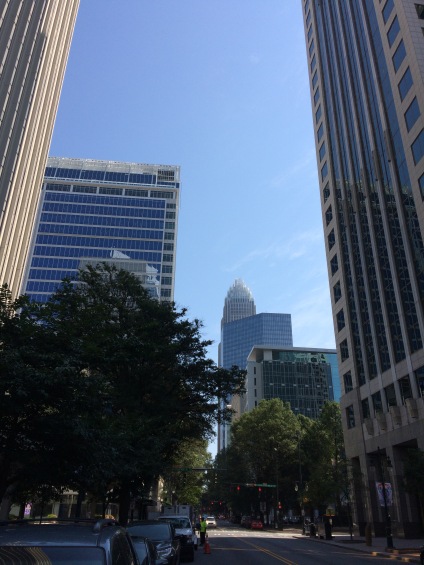 As it turned out, the Levine Museum of the New South was well worth the wait. Informative displays covered the period following the Civil War, beginning with sharecroppers and tenant farmers the moving through the development of the cotton industry and growth of mill towns to the delights of the big city. Politics was covered fairly lightly in the early part of the route through the galleries, but important elements like the rise of organisations such as the KKK in response to increased lower-class freedoms (for poor whites as well as blacks), and segregation in the various workplaces and around the cities were all present in the narrative, and there was a major section on the civil rights movement too. We also learned that interstate banking was born in Charlotte – both Wells Fargo and Bank of America have their roots there – as the city segued from being the hub of Carolina cotton trading into other types of finance. I hadn’t realised that until the early 1980s banks were actually prohibited from operating across state lines, but in 1982 Charlotte’s NCNB (now B of A) bought a bank in Florida, and precipitated the change (for which I’m sure many of us are tremendously grateful). My final, and probably most lasting, take-away was that apparently the orange traffic barrel was invented in Charlotte, and of course now I’m noticing them everywhere!

After a hearty pizza lunch we hopped in a bus up to the North Davidson (or NoDa) neighbourhood. NoDa is a cute suburb whose high street is all craft beer pubs, independent restaurants and quirky boutiques (I have no idea where anyone buys their groceries though), and we enjoyed wandering around before the hot afternoon drove us into a bar for a refreshing cocktail.