I’m sure I’ve forgotten to tell you about all sorts of interesting New York things lately, but it seems like 2018 so far has been all about the travel. After our trip to New Orleans Tom spent 10 days in England for work, then almost as soon as he got home he was off again, this time on his annual jolly (sorry, conference) in Las Vegas. As in previous years, we took advantage of his being out west as an excuse for a holiday, so I flew over to join him after the conference was over for a few days of skiing in Colorado.

Since our last ski holiday was a week with practically no snow in the Alps, we decided to splash out on the Rockies this year, and basically recreated the trip we took two years ago. Sadly the snow wasn’t great by Colorado standards, although we still managed two excellent days at Copper Mountain.

On day three we decided to take a break from downhill and try out cross-country skiing instead, so we caught the bus over to Breckenridge Nordic Centre to take a lesson. We liked the rustic charm of the lodge very much indeed, and the comfortable boots even more.

We knew we’d be skiing on groomed tracks rather than loose snow,  but hadn’t realised that this would involve twin grooves cut into the snow (just where you’d expect to find the double yellow lines along the side of the road). This made it very easy to make progress, as you simply stood in the grooves and slid your skis along. 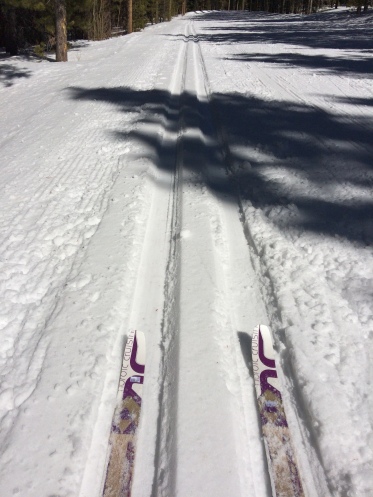 Going down hill was a little challenging, especially as cross-country skis don’t have anything like the edges of alpine ones – we learned the theory of what to do (either lean into the curve and hope for the best, or try to take one ski out of the tracks to do a half-snowplough in the hope of controlling your speed), but from both observation and experience what most people seem to do is just fall over. It was all good fun anyway, although surprisingly tiring, especially on a warm day. 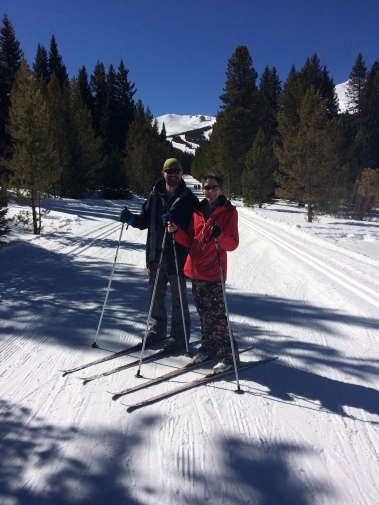 After lunch at the lodge we skiied a little more, then switched our skis for some snowshoes. It was fun tramping through the woods for a while, and overall I think I preferred it to the cross-country ski experience.

Back at Copper for our fourth and final day, we were a little sad that the snow hadn’t held up well to the sunny weekend conditions, and it was getting annoyingly icy in places. We still managed a number of nice runs, and enjoyed a long lunch break in our favourite slopeside spot, so it wasn’t all bad! 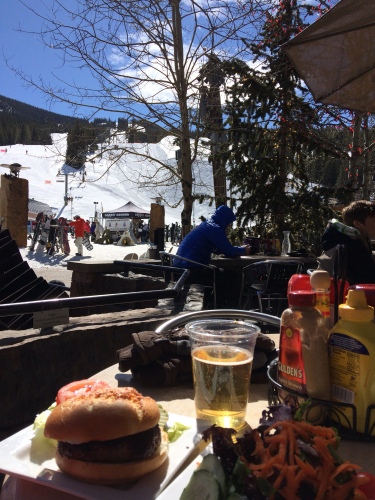 Of course the forecast was predicting a decent amount of fresh snow for that night, which duly fell, and we spent the morning of our travel day wandering around Frisco as the flakes continued to drift down – this always seems to happen on our ski trips!

We enjoyed being back at the charming Frisco Lodge, where we even had the same room as last time, and it was nice to revisit some familiar restaurants too. Staying in Frisco rather than up by the ski resort gives us a lot more options, and we went out for steak, sushi and pizza on various evenings. We also tried a new-to-us cafe for lunch, which was very nice too. This time we’d decided not to rent a car, but took the Summit Express transfer service to and from the airport, which was very efficient and made things much easier – we’ll certainly do that again if we come back.

On the day of our nordic ski adventure we made sure to be back in Frisco by mid afternoon, as we wanted to check out the GatherHouse glassblowing studio. We had heard from two separate people that it was a fun place to visit, and that if we timed it right we’d get to see a demonstration as well as being able to admire their products. It turned out to be even more exciting that we’d anticipated…. 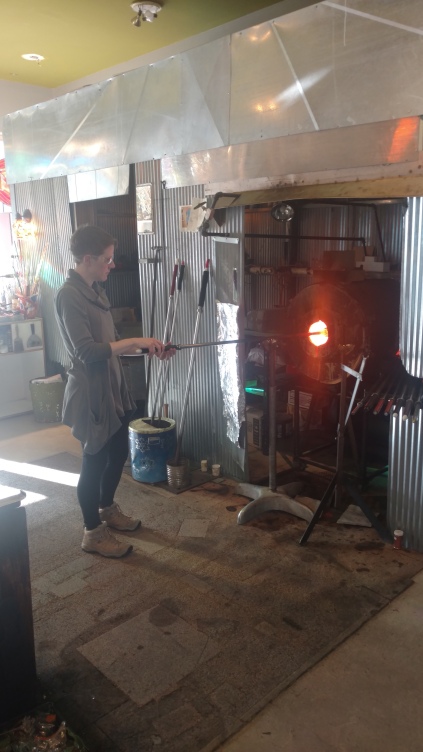 When we arrived the apprentice was working on a piece, so we took a seat to watch him. Once he’d finished, John, the owner, asked if we had time to stay and help them work on something else. We, of course, agreed, and Tom was duly set up with a long pole with a ring on the end, and instructions on how to open parts of the furnace door with it. I was handed a blow torch and asked to train the flame on part of the blob of glass that they were working on.

Things quickly escalated from there – Tom opened and closed his doors in rapid succession, whilst I got to mind the glass blob, rolling it to and fro before carrying it over to heat in the furnace. It turned out we were working on a vase, and after the initial set-up was complete John dipped it into a vat of molten glass – the full weight was surprisingly heavy and difficult to balance on the end of the blowpipe, and I’m still not sure how I didn’t drop it! The final touch was getting to smoosh the spherical sides into something approaching a square shape with wooden panels right at the end of the process – Tom described the finished item as “endearingly wonky”…